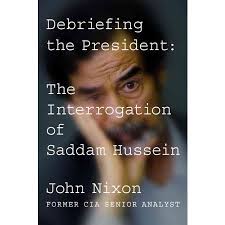 When Saddam Hussein was captured in Iraq in December of 2003, they needed someone to confirm his identity and that person was John Nixon, an ex-CIA senior analyst. He then became one of the first to interrogate Saddam during his capture.

Though being able to identify Saddam, Nixon discovered that what he and the CIA or the American government knew about the deposed Iraqi leader was somewhat different from reality. I think the most unthinkable for me was that Saddam was actually spending most of his time writing a book and his aides are running the government. He wrote that Saddam actually describes himself as President and a writer and that he actually complained about the military taking away his writing materials, thus, keeping him from finishing his book. Moreover, they were also mistaken about Saddam’s attitude on the use of weapons of mass destruction (WMD). Iraq’s supposed possession of WMDs used to be the American and British governments’ reason to justify the invasion of Iraq.

Interestingly, Mr. Nixon also was very critical of the CIA and the Bush administration. It was quite astonishing to know that the CIA mainly just wanted to please the President and that the President only hears what he wanted to hear.