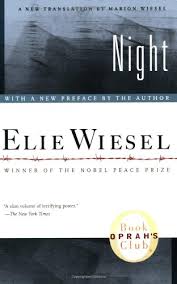 I’ve always loved learning about the world war and people’s stories during those times, particularly the Holocaust and Night is one of such stories. And every time I read about it, I wonder how I would have fared if I were born a Jew in a Nazi-occupied country during the second World War.

This is a first person account of Elie Wiesel, a teenage Jew from Transylvania, Romania. Elie and his family were soon brought to concentration camps in Auschwitz (later in Buchenwald) and were separated from each other. He tells of the unimaginable horrors that he and the others experienced during the war including people being thrown in the crematory particularly babies.

I personally think that it is extremely important that these events be never forgotten and this book serves as a dismal reminder of human’s capacity to be inhuman to humanity itself. A book you should make a point of reading.

“For the survivor who chooses to testify, it is clear: his duty is to bear witness for the dead and for the living. He has no right to deprive future generations of a past that belongs to our collective memory. To forget would be not only dangerous but offensive; to forget the dead would be akin to killing them a second time.”

“Every question possessed a power that was lost in the answer.”

“I shall always remember that smile. What world did it come from?”

“One more stab to the heart, one more reason to hate. One less reason to live.”