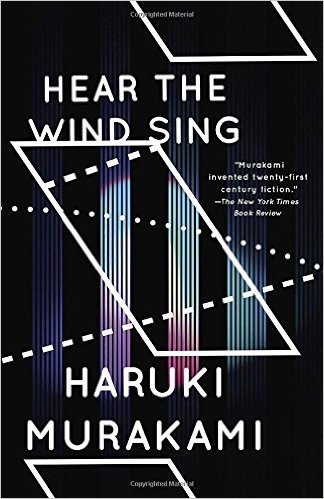 Hear the Wind Sing was Murakami’s first novel, more like a novella actually because it’s very short, and you’d feel it even shorter because of its frequent page breaks.

It’s set in Japan with a nameless narrator on his summer break and his friend known as the Rat who struggles with his everyday life filled with loneliness.

The book isn’t something that lives up to the current Murakami standards. There ain’t much to its plot and it just goes on without anything clear going on. It’s pretty much a collection of the narrator’s encounters with the Rat, with J, and the girl with only nine fingers. Then his being nostalgic about his past relationships.

That said, it doesn’t mean though that I didn’t like this book. There’s no parallel universe in it but there’s a familiar tone. There’s always something interesting in a Murakami novel and as long as it’s read for what it is, you’ll never be disappointed.

“Sometimes, I imagine how great it would be if we could live our lives without bothering other people.”

“I like the sky. You can look at it forever and never get tired of it, and when you don’t want to look at it anymore, you stop.”

“…the wind has its reasons. We just don’t notice as we go about our lives. But then, at some point, we are made to notice. The wind envelops you with a certain purpose in mind, and it rocks you. The wind knows everything that’s inside you. And not just the wind. Everything, including a stone. They all know us very well. From top to bottom. It only occurs to us at certain times. And all we can do is go with those things. As we take them in, we survive, and deepen.

“Everyone who has something is afraid of losing it, and people with nothing are worried they’ll forever have nothing. Everyone is the same.”