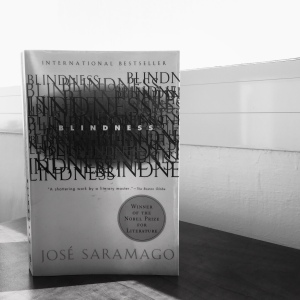 I attempted to read this book four or five times since I received it but hadn’t gotten way past ten pages. It’s not that it’s a difficult read, I just couldn’t get a grip on it. Anyhow, I gave it a shot again last week and I guess the timing’s quite right because I was able to finish it in just a few days.

In a nutshell, Blindness is about a society that collapsed following a worldwide plague of literal blindness. The story begins with a man in his car at a stoplight waiting for the lights to change. Inexplicably, he goes blind. Soon, everyone he goes in contact with go blind. And it follows. So the blindness spreads out all over the nameless place.

All the characters are also nameless. We only get to know them as the doctor, the doctor’s wife, the boy with the squint, the dog of tears, the old man with the black eye patch and so on. This for me adds up to the goodness of the book.

Having had the chance to read The Gospel According to Jesus Christ earlier this year prepared me enough, I guess, to get used to his way of writing. Yes, for me, it needs a bit of getting used to it at first. For one, it’s written in a very dense way, there are no speech marks and no breaks for dialogues, it’s all written in the same lines. I get lost at some points while reading because everyone’s words merge altogether that I have to read it again to make sure I understand who’s saying what. I kind of felt blind, too, in a way as I get lost in the book at times. But I must say that the way the book’s written heightens the enjoyment of reading this book.

The major themes include the presence and lack of morality in a damaged society and the consequences of doing right and wrong. The murder of the leader of the troublemakers in the asylum is one example of making a difficult moral decision in the novel. Prior to this, the doctor’s wife finds out that she actually brought a pair of scissors. She never used it but just hangs it on the wall. She soon made use of it later in the story after the tragic thing that happened to her and the other women in the asylum.

The novel also showed us how fragile a society and how weak/strong humans can be. We see all the characters turn blind (except for one) reduce to animal instinct in order to survive. Señor Saramago blames the authorities for not being able to provide for its people in times of crisis. This is very true and happens almost everywhere nowadays. Furthermore, he tells us that we’re not far from sheer chaos even though we are now living in a modern world that relies mostly on technology.

Blindness is an allegory that people who can see are blind in reality. People don’t see what’s really happening in the world. Blindness is present in the failures of authorities to give what is expected of them. It is present in major issues the world is facing now. People fail to perceive the suffering around them thus resulting to failure of achieving a better community. Towards the end of the story, the characters start to recover their eyesight which strengthens the story’s status as an allegory. This shows that their blindness was just a way of teaching or letting them see and rethink the kind of life they’re living.

This is a very thought-provoking book that will remind every reader to look, or moreover, see everything around us as clearly as we could. Let’s always try our best not to turn a blind eye to the real cruelty/terrors that surround our lives.

“Inside us there is something that has no name, that something is what we are.”

“I don’t think we did go blind, I think we are blind, Blind but seeing, Blind people who can see, but do not see.”

“When all is said and done, what is clear is that all lives end before their time.”

“Words are like that, they deceive, they pile up, it seems they do not know where to go, and, suddenly, because of two or three or four that suddenly come out, simple in themselves, a personal pronoun, an adverb, an adjective, we have the excitement of seeing them coming irresistibly to the surface through the skin and the eyes and upsetting the composure of our feelings, sometimes the nerves that can not bear it any longer, they put up with a great deal, they put up with everything, it was as if they were wearing armor, we might say.”