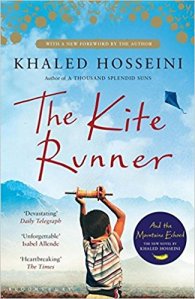 I’ve loved this book ever since I’ve read it in 2013. It’s one of the books that really left something in me. One of the very few that emotionally drained me. I watched the film adaptation and for those of you who have been following me for some time now, I’m not a big fan of movies based on books, so of course, I was disappointed. The only thing I liked in the movie was the boy who played the role of Hassan. Hassan has always been one of the top book characters very dear to me since I’ve read this and he’s the only thing that didn’t disappoint in the movie.

I’ve decided to reread this a few days before Christmas. I knew that the book is gonna make me sad and might affect my mood for the holidays, but I read it anyway.

The Kite Runner is the story of Amir and Hassan while growing up in Kabul in the early 1970s. Amir, a Sunni, is the son of a wealthy businessman (Amir calls him Baba) while Hassan, a Shia, is the son of Ali, their Hazara servant. The two boys are best friends but cultural and social barriers still separate them. Baba treats them equally as much as he could. Amir started to feel jealous of Hassan as Baba always admires him and always catches his attention without even trying while Amir on the other hand is trying too hard to impress him but Baba always gets disappointed.

Amir decided to impress Baba in the coming annual kite-flying/fighting tournament. This is where the story really started. My heart broke for Hassan the first time I’ve read this. And it still did the second time. And if I continue writing about it, I might delve into spoilers even though maybe most of you must have read the book already.

This is a book about friendship, father and son, brotherhood, relationships, jealousy, guilt, redemption, love, trust, freedom, forgiveness and mistakes. Mistakes we either make or make us.

Khaled Hosseini used a very descriptive and simple writing style. The way and the amount of historical background he provided in the book was good enough so as not to overwhelm the reader. I liked how the story was told as it made me get attached to the characters which is one of the important things to me when I read a book.

I was once again blown away by The Kite Runner and this will definitely stay on top of my favorite books, quietly seeping into my being.

“For you, a thousand times over.”

“And that’s the thing about people who mean everything they say. They think everyone else does, too.”

“It may be unfair, but what happens in a few days, sometimes even a single day, can change the course of a whole lifetime.”

“It was only a smile, nothing more. It didn’t make everything all right. It didn’t make ANYTHING all right. Only a smile. A tiny thing. A leaf in the woods, shaking in the wake of a startled bird’s flight. But I’ll take it. With open arms. Because when spring comes, it melts the snow one flake at a time, and maybe I just witnessed the first flake melting.”

9 thoughts on “A Reread: The Kite Runner by Khaled Hosseini”