I think some people are just inexplicably bonded. Drawn by forces beyond their own comprehension, they have no choice but to gravitate toward one another. Destined by fate to keep crossing paths until they finally get it right.

I don’t like cats. I don’t hate them. Hate is such a strong word. I just don’t like them. We had cats growing up because my younger brother adores them but I never really cared about them, didn’t play with them, didn’t feed them at all. I once gave away one of my brother’s most evil feline without them knowing at home (not until after a few days, that is!) because the evil cat broke the aquarium (which was also my brother’s) while trying to catch a fish. I was the primary suspect to the crime because I was caught many times killing fish from the same aquarium but I swear, it wasn’t me on that occasion! It was the darn pussy cat! But hey, the moment I got rid of that evil cat, my heart was in the right place! Anyhow, I really didn’t like cats even before that happened. The only cats I like are Garfield (of course!) and Sassy from the movie Homeward Bound.

Alright, alright. I know cats can be pretty damn cute, innocent-faced murderers that they are, right? Who’s not to like their big round eyes and their furry bodies? Well, I think there are still a number of people who find them irritating or boring as much as I do. I was once gifted a shirazi cat a few years ago, however, it was proven and tested that we have a great amount of enmity for each other, so I gave it away too, to avoid killing it or be killed by it! 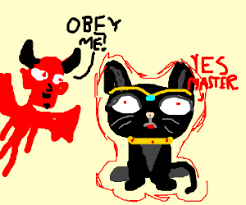 First of all, I really think they’re possessed by the devil. One minute they’re so cute and nice then totally different the next. One moment they’re quiet then they’ll be growling like crazy all of a sudden. They’d even stare at me like I did them wrong at one point then starts acting like they love me too much a few minutes later. Sometimes, too, they’d just bit or scratch me out of nowhere!

Second, they’re creepy. Do cats really have to stare at me when I eat, read, watch TV or when I pee?

Third, too much of their fur comes off. Cleaning cat hair off on almost everything at home specially the sofas is just another added chore.

Fourth, they don’t have social skills. They just lurk in wherever they want at home and no matter how I persuade them to come to me, they’d just stare at me blankly like “what’s your problem?” then walk away!

Fifth, cats are mean. I don’t know how many times I’ve been scratched by my brother’s pet cats. I was also bitten once. I mean, come on, why? I didn’t do anything to them. They even scratch my books, the sofa, my pillow, the door even! And they break pots and aquariums! Pure evil!

Sixth, I think they’d eat or kill me at any given chance!

Seventh, they think/act like they own everything they see.

So how about you? Do you or do you not like cats? Why and why not?