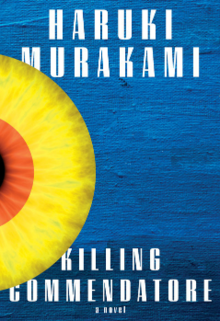 I started to read this book in February and was really enjoying it but had to put it on hold after reading more than half of the 681 pages when I realized I actually still don’t have any idea what’s it about or what’s it all for (or am I missing something?). A week ago (thanks to the long holiday!), I realized this is Murakami. It may (or it may not) be the entire point of the story. Where is it heading? It doesn’t matter.

Killing Commendatore follows the life and experiences of the unnamed narrator, a portrait painter from Tokyo. He and his wife separated and he ended up living in a house on top of a mountain which belongs to Tomohiko Amada, a famous artist. It was after discovering the painting, Killing Commendatore, in the attic that a series of mysterious circumstances started happening.

This again proved what a great narrator Murakami is but I’m slightly unsatisfied with the ending, though. I wished he could have given us a little bit more in order to connect the mysteries somehow. And a little bit more of Menshiki perhaps? But then again, it’s Haruki Murakami. He always leaves the reader wondering about unanswered questions or an idea or this time a metaphor. All in all, it’s a good read but not one I’d recommend as an introduction to Murakami.

“That sometimes in life we can’t grasp the boundary between reality and unreality. That boundary always seems to be shifting. As if the border between countries shifts from one day to the next depending on their mood. We need to pay close attention to that movement otherwise we won’t know which side we’re on.”

“Our lives really do seem strange and mysterious when you look back on them. Filled with unbelievably bizarre coincidences and unpredictable, zigzagging developments. While they are unfolding, it’s hard to see anything weird about them, no matter how closely you pay attention to your surroundings. In the midst of the everyday, these things may strike you as simply ordinary things, a matter of course. They might not be logical, but time has to pass before you can see if something is logical.”

“I had taken a nap, but my head was muddled. It felt like a ball of yarn had been crammed into the back of a narrow desk drawer, and now the drawer wouldn’t close properly.”

“A face is like reading a palm. More than the features you’re born with, a face is gradually formed over the passage of time, through all the experiences a person goes through, and no two faces are alike.”

“From far off, that slice of ocean was nothing more than a dull lump of lead. Why people insisted on having an ocean view was beyond me. I much preferred gazing at the surrounding mountains. The mountains on the opposite side of the valley were in constant flux, transforming with the seasons and the weather, and I never grew tired of these changes.”