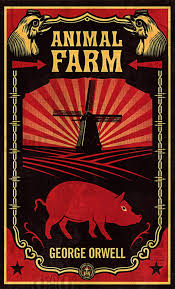 Animal Farm is a striking but easy to follow little novel about a farm taken over by animals after overthrowing Mr. Jones, the cruel and often drunk owner of Manor Farm.

This political satire has a simple but effective plot. George Orwell clearly understands power and its temptation and how people give in to it. Though people begin to pursue power with good intentions at first, most of the time, those who think they know what’s best for the people force it to the powerless.

The book also showed tools of propaganda works as well as brainwashing people in totalitarian regimes. The pigs were able to make the rest of the animals believe everything they say. They were quite convincing that the other animals were led to believe that their leader is always right. The pigs who were once just simple comrades to the other animals turned out to become dictators.

How the book ended was dramatic and at the same time tragic. The pigs turned out to be as corrupt as the humans they once disdained and replaced. The other animals in the farm can no longer tell the difference between pigs and men.

“Man serves the interests of no creature except himself.”

“Man is the only creature that consumes without producing.”

“The distinguishing mark of man is the hand, the instrument with which he does all his mischief.”