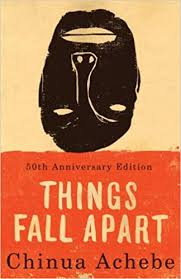 Things Fall Apart by Chinua Achebe is my first classic of African literature. Set on the eve of the colonial encounter between British missionaries and the people from Igbo villages called Umuofia. It tells the story of one of the village leaders, Okonkwo, born to a lazy father but told himself early on that he will not be like his father and thus became hardworking and soon became famous for his strength and ferocity in war.

The book is divided into three parts. First, the Igbo society, a typical African society with all its beliefs and customs. Second, Okonkwo’s expulsion from his village as a punishment for a crime. And third, his arrival and time in Mbanta, his mother’s village. As is with the history of colonial conquest, though there were moments of hope, the ending was tragic and inevitable.

Definitely an interesting read but there’s just too much characters and lots of foreign languages I just couldn’t get used to so it was a bit on the hard side for me reading this but I think a reread will make me like this more.

“A proud heart can survive general failure because such a failure does not prick its pride. It is more difficult and more bitter when a man fails alone.”

“No matter how prosperous a man was, if he was unable to rule his women and his children (and especially his women) he was not really a man.”

“Age was respected among his people, but achievement was revered. As the elders said, if a child washed his hands he could eat with kings.”

“He has put a knife on the things that held us together and we have fallen apart.”