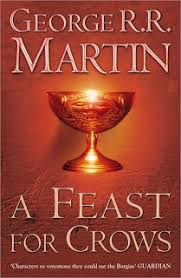 A Feast for Crows is the fourth book in the series of A Song of Ice and Fire. It tells us the aftermath of the war of the five kings and focuses on the main continent of Westeros. From what I’ve read, the fifth book A Dance of Dragons is this book’s counterpart that takes place at relatively the same time outside of Westeros.

Well, this was the least entertaining among the 4 books I’ve read so far. This introduced a lot of new characters and there were very few of those we’ve known, hated and loved from the previous books. I got bored with the chapters involving the Greyjoys.

I, however, enjoyed Cersei’s chapters for sure. There was a great emphasis on Cersei here that I was really looking forward to her chapters because getting into her head was just so fun. I love her ruthlessness and her chapters were eventful. It makes me sad to think, though, that she won’t probably be in the fifth book as her character was mostly explored here already.

Jaime’s chapters were sympathetic to read. I’ve learned to love Jaime for a long time and it’s sad reading about him searching for places where he could fit in.

It was also nice to read Sansa and Arya’s mirrored plots, having to find themselves in need to take a second identity to survive. It wasn’t really surprising to find Arya in this situation but Sansa? As we know, these two sisters have very different personalities. But seeing how both of them are surviving in sort of the same way, they really are more alike as sisters after all.

I find the entertaining part of the book lost for me (except for Cersei’s chapters) but if viewed as a whole series, this is still a good read with George R.R. Martin’s established tradition — a book immensely rich in detail and extremely clever complexity. I am still determined to finish reading to the end. I’ve invested enough time to make it this far, why stop now?

“My old grandmother always used to say, Summer friends will melt away like summer snows, but winter friends are friends forever.”

“History is a wheel, for the nature of man is fundamentally unchanging. What has happened before will perforce happen again”

“We all dream of things we cannot have.”

“Sometimes there is no happy choice… only one less grievous than the others.”

6 thoughts on “A Feast for Crows by George R. R. Martin”