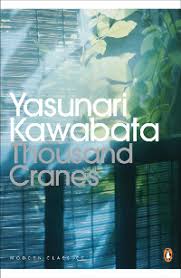 Thousand Cranes is an Oedipal narrative told by Kikuji, who is strongly attracted to his deceased father’s last lover. Set after the end of World War II, it’s a sad, sensual, delicate, somewhat depressive, quiet novel.

Since I started reading Haruki Murakami’s books, I became very interested with other Japanese authors and Japanese culture as well. I’m not much into drinking tea but I’ve read a few things about the traditional Japanese tea ceremony which plays a fundamental part in this book. I’m fairly certain I didn’t quite understand everything about the tea ceremony (or the book entirely) but how Yasunari Kawabata uses these tea cups, tea bowls and utensils to make memories come alive and trace history of these items’ ownership was one reason why I really enjoyed reading this.

I was slightly disappointed with the ambiguous ending but thinking about it now as I write this, it wasn’t really a bad thing.

“Now, even more than the evening before, he could think of no one with whom to compare her. She had become absolute, beyond comparison. She had become decision and fate.”

“Your mother was such a gentle person. I always feel when I see someone like her that I’m watching the last flowers fall. This is no world for gentle people.”

“He could not call up the faces of his own mother and father, who had died three or four years before. He would look at a picture, and there they would be. Perhaps people were progressively harder to paint in the mind as they near one, loved by one. Perhaps clear memories came easily in proportion as they were ugly.”