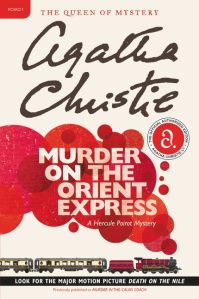 Murder on the Orient Express is my first introduction to Hercule Poirot mystery from Agatha Christie. I’ve read almost all of the Miss Marple books but never a single one from Poirot.

Hercule Poirot is a Belgian detective on-board the Orient Express. An American guy was found dead on his compartment while the train was halted by a snow storm. Police can’t get in the train so Poirot took charge of the investigation.

Just like the Miss Marple books, this kept me guessing as the story progresses. And I wasn’t able to guess it right. Damn! Anyway, I liked that each character was given their own chapters and all of them were suspects. All of them were realistic, too.

This turned out to be a really great introduction of Hercules Poirot to me. It was a captivating read, smart and mysterious. Looking forward to my next Poirot mystery.

“If you confront anyone who has lied with the truth, he will usually admit it – often out of sheer surprise. It is only necessary to guess right to produce your effect.”

“But I know human nature, my friend, and I tell you that, suddenly confronted with the possibility of being tried for murder, the most innocent person will lose his head and do the most absurd things.”

You can never really go back to the same waters. Not only are you no longer the same, but neither are the waters you left. The current has changed. The elements of nature have affected the stream. When you return, although it appears the same, it really is a different river and you are a different person. Therefore, you cannot cross the same river twice.

She has done enough for him.