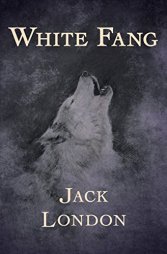 My first Jack London read was The Call of the Wild and I absolutely enjoyed it so I didn’t have second thoughts reading another of his works and this time, White Fang.

White Fang is a story of an extra ordinary wolf, a well-developed character for a wolf. We follow his adventures as he makes friends and enemies along the way. It’s intriguing how a wolf deals with such horrible conditions in the wild like brutality, abuse and famine to name a few.

The story started somewhat slow, it took some time before getting into the exciting parts of the story but the author is definitely skilled to keep you reading and convincingly get you into a wolf’s point of view. The story eventually became thrilling, suspenseful and enjoyable. I’m glad it had a happy ending.

“He was a silent fury who no torment could tame.”

“Fear urged him to go back, but growth drove him on.”

“The Wild still lingered in him and the wolf in him merely slept.”

“He had no conscious knowledge of death, but like every animal of the Wild, he possessed the instinct of death. To him it stood as the greatest of hurts. It was the very essence of the unknown; it was the sum of the terrors of the unknown, the one culminating and unthinkable catastrophe that could happen to him, about which he knew nothing and about which he feared everything.”

“But the Wild is the Wild, and motherhood is motherhood, at all times fiercely protective whether in the Wild or out of it.