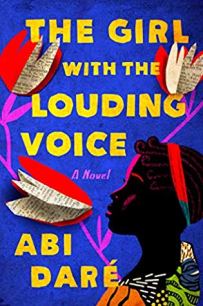 The Girl with the Louding Voice is Abi Dare’s debut novel and wow, what an amazing debut!

This is Adunni’s story, a fourteen-year-old girl from the small village of Ikati in Nigeria who wants a proper education and a louding voice. She lives with her alcoholic father and two brothers. Her mother was the breadwinner of the family and wished for Adunni to be able to attend and finish school but she soon passed away. At the wake  of her mother’s death, her father married her off to a rich man named Morufu to be his third wife in order to collect the bride-price. A series of events occurred while she was married to Morufu and soon a tragedy, which forced her to flee. She then found herself in Big Madam’s mansion in Lagos working without pay and beaten everyday.

Adunni is one unforgettable character. She is one of the many girls around the world who didn’t have the privilege to study and learn. She is one of the many child brides. Abi Daré incredibly gave life to Adunni’s voice. Adunni speaks broken English as the story started and I liked that the author wrote it this way and showed us how Adunni’s English progressively changed throughout the book. She eventually developed her English as she begins to study in secret.  Adunni later realized in the story that English is just a language like many others and that the ability to speak good English is not the measure of an intelligent mind.

I enjoyed this book so much. There were many parts in the story that were truly sad but I loved her character so much because although she faced a lot of trials and hardships, she refused to give up, she never once lost faith. She was always positive and hopeful that someday, she will be that girl with the louding voice.

“You must do good for other peoples, even if you are not well, even if the whole world around you is not well.”

“That day, I tell myself that even if I am not getting anything in this life, I will go to school. I will finish my primary and secondary and university schooling and become teacher because I don’t just want to be having any kind voice… I want a louding voice.”

“I want to tell her that God is not a cement building of stones and sand. That God is not for all that putting inside a house and locking Him there. I want her to know that the only way to know if a person find God and keep Him in their heart is to check how the person is treating other people, if he treats people like Jesus says–with love, patience, kindness, and forgiveness.”

“Who knows what else tomorrow will bring? So, I nod my head yes, because it is true, the future is always working, always busy unfolding better things, and even if it doesn’t seem so sometimes, we have hope of it.”

“When you get up every day, I want you to remind yourself that tomorrow will be better than today. That you are a person of value. That you are important.”