To lose balance sometimes for love is part of living a balanced life. 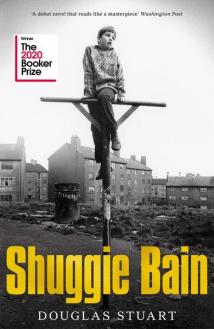 The story is set during the Thatcher-era in Glasgow, Scotland. A time where men are almost out of work and single mothers try to keep their families together. Agnes Bain marries for the second time and she sinks deeper and deeper into alcoholism. Shuggie is the only child from this second union and he loves and adores his mother so much and he tries his best to protect and save her from herself. Shuggie had a difficult childhood but his love for his mother never ever falters. He has a philandering father and a sister and a brother from his mother’s first marriage. They lived a poor life relying on government aid and sometimes stealing money from coin boxes to use electricity. Moreover, Shuggie is not like the other boys in their neighborhood, he tends to act more like a girl and this caused him unwanted attention and bullying. It’s heartbreaking reading about him growing up with this sense of being different while being humiliated and hurt by the people around him.

Shuggie Bain tackled many themes: love between mother and child, poverty, resilience, addiction, alcoholism, sexuality, devotion, struggle, hope. This is not an easy read and the story was paced rather slow. It’s heart-wrenching but it shows the power of human spirit. It’s miserable but there is always that hope, no matter how tiny, that it will somehow get better.

Highly-deserved winner of the Booker Prize.

“Sometimes you don’t even want a thing. You just can’t
bear anyone else to have it.”

“Flames are not just the end, they are also the beginning. For everything that you have destroyed can be rebuilt. From your own ashes you can grow again.”

“Rain was a natural state of Glasgow. It kept the grass green and the people pale and bronchial.”

“My mother has never worked a day in her life. She’s far too good-looking for that.”