A Feast for Crows is the fourth book in the series of A Song of Ice and Fire. It tells us the aftermath of the war of the five kings and focuses on the main continent of Westeros. From what I’ve read, the fifth book A Dance of Dragons is this book’s counterpart that takes place at relatively the same time outside of Westeros.

Well, this was the least entertaining among the 4 books I’ve read so far. This introduced a lot of new characters and there were very few of those we’ve known, hated and loved from the previous books. I got bored with the chapters involving the Greyjoys.

I, however, enjoyed Cersei’s chapters for sure. There was a great emphasis on Cersei here that I was really looking forward to her chapters because getting into her head was just so fun. I love her ruthlessness and her chapters were eventful. It makes me sad to think, though, that she won’t probably be in the fifth book as her character was mostly explored here already.

Jaime’s chapters were sympathetic to read. I’ve learned to love Jaime for a long time and it’s sad reading about him searching for places where he could fit in.

It was also nice to read Sansa and Arya’s mirrored plots, having to find themselves in need to take a second identity to survive. It wasn’t really surprising to find Arya in this situation but Sansa? As we know, these two sisters have very different personalities. But seeing how both of them are surviving in sort of the same way, they really are more alike as sisters after all.

I find the entertaining part of the book lost for me (except for Cersei’s chapters) but if viewed as a whole series, this is still a good read with George R.R. Martin’s established tradition — a book immensely rich in detail and extremely clever complexity. I am still determined to finish reading to the end. I’ve invested enough time to make it this far, why stop now?

“My old grandmother always used to say, Summer friends will melt away like summer snows, but winter friends are friends forever.”

“History is a wheel, for the nature of man is fundamentally unchanging. What has happened before will perforce happen again”

“We all dream of things we cannot have.”

“Sometimes there is no happy choice… only one less grievous than the others.”

This is the third book in the A Song of Ice and Fire series. I started reading late last year but only managed to finish it a few days back. It won’t be easy to write about the book without spilling a few beans so if you haven’t read the book or watched the TV series yet and intend to, you can stop here.

So there’s far greater turmoil in the seven kingdoms thus it’s packed with lots of crucial events. There’s the Lannisters, the ruling family. Daenerys with her dragons. Robb as King of the North. Threats beyond the Wall. The Red Wedding. Joffrey and Margaery’s wedding. Catelyn releasing Jaime from captivity. Arya escaping Harrenhal and soon ran into the Brotherhood Without Banners. Jamie’s hand was cut. Bran continues his journey north. Jon Snow’s adventure with the wildlings. Sam and The Night’s Watch were attacked by the Others. The Onion Knight back in Dragonstone. Tywin Lannister is now the Hand of the King. The thrilling and climactic duel of the Red Viper and The Mountain. The Unsullied. Sansa’s escape from King’s landing. And too much death.

A Storm of Swords is also filled with regicide. I’m not a fan of Robb but since he’s a Stark, it saddens me that he was killed in The Red Wedding. It was later revealed in the book that this were all planned by Tywin Lannister and Lord Bolton. I’m extremely glad though that Joffrey died, too, on his own wedding day. Unfortunately though, Tyrion’s accused of poisoning him. I’m just so glad that Tyrion was the one who killed his father, Tywin Lannister. Some deaths were surprising (and fun!) which proves that no one is ever safe in the hands of the author! But I also didn’t expect Catelyn Stark alive at the end!

As in the first two books, this also have multiple POVs and each viewpoint character has a specific story. As usual, I enjoyed the most Tyrion’s viewpoint. Jaime’s, too! I enjoyed every single one actually! The author hauled the characters through a series of events and are further fleshed out which led to their change by the end of the book. This is where we see the most character transitions. Like I don’t hate Jaime Lannister anymore. It’s good to know his point of view of the world and in this book, it’s good to see that he is actually different from Tywin or Cersei on the inside. (His final scenes with Tyrion was so, so sad though.) And I didn’t really hate The Hound from the start but in this book, I can say I really like his character. And you will love Tyrion even more! Daenerys developed into a stronger and matured queen supported by interesting characters like Ser Barristan and Ser Jorah. And of course, Jon Snow’s story is becoming more interesting as it continues to unfold.

A Storm of Swords is a brilliant book — character-wise, plot-wise. I’m again blown-away by the story and characters, very detailed and the story expands in different ways while so much is happening. Contrary to the second book A Clash of Kings, I loved how the book came as fast as a bullet rain. There’s always something significant happening in every chapter. There’s no running out of suspense, twists and turns. This series just keeps getting better and better.

“Sometimes I think everyone is just pretending to be brave, and none of us really are. Maybe pretending is how you get brave, I don’t know.”

“Old stories are like old friends, she used to say. You have to visit them from time to time.”

“Every man must die, Jon Snow. But first he must live.”

“The greatest fools are ofttimes more clever than the men who laugh at them.”

“Some battles are won with swords and spears, others with quills and ravens.”

I had a wonderful reading adventure in 2015 and I managed to read 55 books! And so today, in no particular order, I would like to share the top 5 most memorable, most entertaining, most touching and most awesome books I have read:

This is the story of Louis Zamperini, a young and promising Olympic runner from Torrance, California and served as a bomber crew in the Pacific during the second World War.

As a bombardier, Louie was in-charge of locating the targets while in flight. He and his crewmates had terrifying experiences during their missions until one day, they had to fly in the crippled plane Green Hornet in order to save their friends. The plane went down in the Pacific and only three of them survived thus where the real story started.

What Louis went through as the plane went down in the Pacific and as a POW would have broken other people but not him. He remained “unbroken” to the very end.

This is an amazing story and very well-written. I highly, highly recommend it to everyone!

2. The Night Circus by Erin Morgenstern

I read this while I was vacationing in Vietnam and it was really the perfect time and place to read this book. It was recommended to me by one of my friends in Goodreads and bought it right away when I saw it in the bookstore. I’m not a big fan of fantasy novels but I definitely enjoyed this.

The Night Circus is about magic, love, desire & imagination. The main story is about two magicians, Marco & Celia, who were committed by their guardians to a mysterious competition designed to end in death.

The circus known as Le Cirque de Reves felt so real and alive, it makes you feel you are there in that magical world.

This is a real page-turner and yes, I definitely recommend it to everyone, old and young! 🙂

I think everyone knows the plot of this book already so I don’t have to bother describing and yes, it’s one of my top reads this year! I love Amy! Funny and smart bitch! Haha!

This is the kind of book that’s nearly impossible to put down. I enjoyed every page of it and surprisingly, I liked the movie, too! I’m no fan of movies based on books because I’m often disappointed in them (except for LOTR) but in the case of Gone Girl, it was okay.

So if you haven’t read this yet, read it. It’s twisted & disturbing but irresistible.

Stoner is a plain and realistic human drama. Nothing much happensin the story and it lacks that “excitement” most people look for in a book nowadays BUT it is so deep, significant, captivating, saddening & depressing as hell.

This is not a big, life-changing kind of book but it might be a good reminder to everyone that people are important and that your contribution to the world doesn’t have to be something huge, it just have to be relevant and meaningful.

5. A Game of Thrones by George R.R. Martin 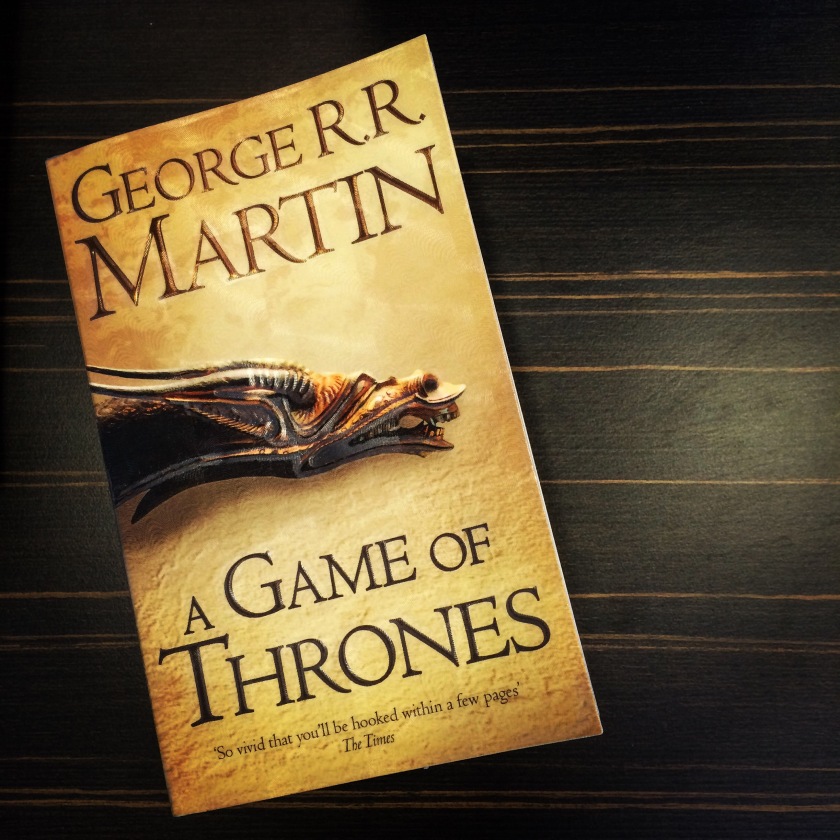 I have only read two epic fantasy books, The Lord of the Rings (of course!) and this! I regret that I didn’t read this right away. This is just so awesome! The many different plots will keep you want to read more, not to mention the multiple POVs. George R.R. Martin was so adept in giving life to all the characters and for me, the direwolves are the coolest! 🙂

I’m quite surprised at how much I love this book, really! That feeling while you read this book is just different, I don’t know, like you’re transported to another world, excellently made world! I just love this book to pieces! A Clash of Kings? Yes, please.

The Road by Cormac McCarthy

The Invention of Wings by Sue Monk Kidd

All the Light We Cannot See by Anthony Doerr

Of Mice and Men by John Steinbeck

One Flew Over the Cuckoo’s Nest by Ken Kesey

How about you? What are your favorites this year? Any recommendations? I’d be glad to hear from you!