The feelings that hurt most, the emotions that sting most, are those that are absurd – The longing for impossible things, precisely because they are impossible; nostalgia for what never was; the desire for what could have been; regret over not being someone else; dissatisfaction with the world’s existence. All these half-tones of the soul’s consciousness create in us a painful landscape, an eternal sunset of what we are. 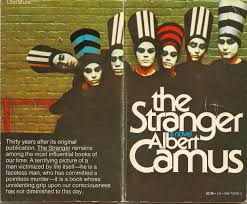 Narrated by a Mr. Meursault, whose mother just died and who was later put on trial because of killing an Arab man, then soon sentenced to be executed. While the people who knows him think that he’s innocent, he himself don’t feel guilty of the murder. However, he felt that he’s a threat to the society for being indifferent.

This is probably not the easiest kind of philosophy to swallow, however, I think it’s something you can read if you want something to stimulate your mind. It doesn’t matter if you’ll agree with the book or not in the end, but it is a challenging one.

“I’ve never really had much of an imagination. But still I would try to picture the exact moment when the beating of my heart would no longer be going on inside my head.”

“Mother used to say that however miserable one is, there’s always something to be thankful for. And each morning, when the sky brightened and light began to flood my cell, I agreed with her.”

“After awhile you could get used to anything.”