To make the right choices in life, you have to get in touch with your soul. To do this, you need to experience solitude, which most people are afraid of, because in the silence you hear the truth and know the solutions.

Choose a path. Stay with your path. Be ready to face obstacles. Even if you take a wrong turn, at least it will be your turn, your life, your mistake.

I think some people are just inexplicably bonded. Drawn by forces beyond their own comprehension, they have no choice but to gravitate toward one another. Destined by fate to keep crossing paths until they finally get it right. 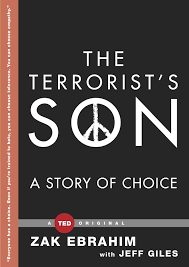 Zak Ebrahim was only 7 when his father El Sayyid Nosair shot Rabbi Meir Kahane, the leader of the Jewish Defense League in November 1990. His father also helped to plan the bombing of the World Trade Center in 1993 while he was in prison. Zak, together with his family, spent years visiting his father in prison until his mom finally decided to stop all communications with him. They also changed their names and his mom remarried.

This is a very quick and interesting read. Very inspiring as well as he did not grow up hating. Wonderful!

“I’m convinced that empathy is more powerful than hate and that our lives should be dedicated to making it go viral.”

“Even people who’ve been raised on hate since birth, people whose minds have been warped and weaponized, can make a choice about who they want to be… People who have been victimized can understand more deeply than anyone how little the world needs more victims.”