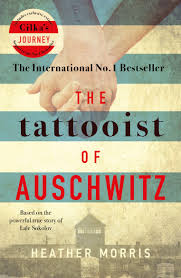 I’ve been seeing this book almost everywhere both online and offline and so I’ve finally decided to purchase an ebook and see why people are so raving about it.

The Tattooist of Auschwitz is Lale’s true story during the second world war. It tells us how he became the tattooist in Auschwitz and the trials and sufferings he and the others experienced there.

I liked the story, I do, but I didn’t quite like the writing. I’m a big fan of world war reads but this just came a bit flat for me. I also wasn’t able to connect with the characters and there was no character development. I also didn’t feel that much emotion while reading this unlike the other books I’ve read about the war. I did felt some but I would have loved it more if I were able to feel a connection with the characters or between Lale and Gita. I kinda felt like the bond between them was missing, an opportunity missed for a beautiful love story. Or is it just me? Don’t get me wrong, this would have really been a great story but I really felt the writing didn’t do it justice.

Any holocaust-related story is a gripping tale but I wasn’t blown away with this one. Still I’m glad I’ve read it.

“I know he is not perfect, but I also know he will always put me first.”

“To save one is to save the world.”

“Remember the small things and the big things will work themselves out.”