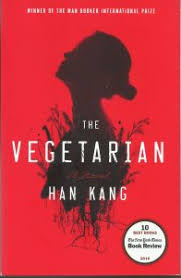 Yeong-hye wakes up from a nightmare one morning and decided to stop eating meat and without hesitation, throws away every meat in their house. And so we follow her story as she loses control of herself little by little. It started firstly with her refusing meat. Secondly, her not being comfortable with her body and lastly, with her physical and mental state drift somewhere out of this world.

The Vegetarian comes in three parts in chronological order from Yeong-hye’s husband, brother-in-law and her sister’s perspectives. I personally would have loved to know Yeong-hye’s thoughts specially about the dream she had that changed everything for her.

This is a short (but not really quick) and compelling read, beautiful at the same time brutal. In it is a depth that demands attention.

“The feeling that she had never really lived in this world caught her by surprise. It was a fact. She had never lived. Even as a child, as far back as she could remember, she had done nothing but endure.”

“The pain feels like a hole swallowing her up, a source of intense fear and yet, at the same time, a strange, quiet peace.”

“Her life was no more than a ghostly pageant of exhausted endurance, no more real than a television drama. Death, who now stood by her side, was as familiar to her as a family member, missing for a long time but now returned.”

“Time was a wave, almost cruel in its relentlessness.”