It is not death that a man should fear, but he should fear never beginning to live.

When people don’t express themselves, they die one piece at a time.

The story opens with a very straightforward narrative: Juan Preciado is on his way to Comala to carry out his dying mother’s request — to search for his father Pedro Paramo and claim what’s his. The story gets complicated as soon as he arrived.

The book is multi-voiced. It began in the first-person then a chorus of voices followed thereafter. There were third and first-person voices both in the past and present tense, between the living and the dead.

Juan Preciado eventually realized that everyone is dead in Comala and that he was just talking with spirits because Comala became some sort of a purgatory. I liked the idea that almost everyone he met were dead. Eerie! Juan Preciado’s disappearance made it a bit confusing for me though. Or did he really disappear? Did he die? I’m still not sure.

With its beautiful prose and as a great example of magical realism, I am inclined to reread it to try to seek and understand several details of the story that might have passed me by on my first read.

“No one knows better than I do how far heaven is, but I also know all the shortcuts. The secret is to die, when you want to, and not when He proposes. Or else to force Him to take you before your time.”

“Death is not something you offer as entertainment. No one goes around looking for sadness.”

“Everyone chooses the same path. Everyone leaves us.”

“…Don’t worry about me. I have hidden my pain in a safe place. Don’t let your heart stop beating.” 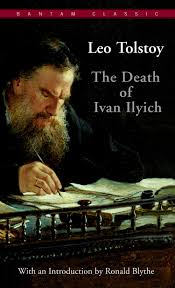 The Death of Ivan Ilyich is a novella that begins at the end — the death of Ivan Ilyich. We are then carried back to the years of his youth and other life experiences until he gained the position of a judge in a city. Unfortunately, he fell and hurt his side one day while furnishing his house. He didn’t think of the fall as a big deal and so went on with life, as usual. Little did he know that this incident will cause a big impact in his life.

I find Ivan Ilyich’s character boring but Leo Tolstoy has a way of making the reader feel what the character is feeling. He lets us feel Ilyich’s frustrations as a man nearing his death at the age of forty-five. We feel his anger, fear and irritation as well as his annoyance towards his family who don’t see his death as imminent.

This is a novella that contains so much. It’s a story that leaves you thinking and questioning about the life you are living. Is it right to just live according to the rules? Is having a full-time job giving your life its true meaning? Is keeping up with the society’s expectations enough to say we are living a good life? It’s mostly the same things that Ivan Ilyich asked himself as he looked back in his life while on his death bed and when he came across honest answers to his questions, he found peace and accepted his death.

“Death is finished, he said to himself. It is no more!”

“It can’t be that life is so senseless and horrible. But if it really has been so horrible and senseless, why must I die and die in agony? There is something wrong!”

“There was no deceiving himself: something terrible, new, and more important than anything before in his life, was taking place within him of which he alone was aware.”

“It occurred to him that his scarcely perceptible attempts to struggle against what was considered good by the most highly placed people, those scarcely noticeable impulses which he had immediately suppressed, might have been the real thing, and all the rest false”

There are plenty of ways to die, but only love can kill and keep you alive to feel it.

Smiling outside. Dying within. Beautiful suicide.

Beneath the quiet moonlight.

Inside, she just died.

It is a curious thing, the death of a loved one. We all know that our time in this world is limited, and that eventually all of us will end up underneath some sheet, never to wake up. And yet it is always a surprise when it happens to someone we know. It is like walking up the stairs to your bedroom in the dark, and thinking there is one more stair than there is. Your foot falls down, through the air, and there is a sickly moment of dark surprise as you try and read just the way you thought of things.

Every man’s life ends the same way. It is only the details of how he lived and how he died that distinguish one man from another.

She always smiles. Inside, she’s dying.

Holding on to anger is like drinking poison and expecting the other person to die.